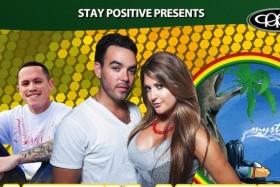 For more details, scroll down…

Much Love Mystic family! We write to you from the road… heading down I-5 from Chico, CA to Las Vegas, NV. Labor Day weekend is in full swing and we’re kicking it off with a huge show at Mandalay Bay with none other than Ziggy Marley this Friday night!

Before going any further, let us send a huge blessing to you all and it is our hope that you have had an epic summer so far. Since we last spoke, we’ve been around the world and back! We spent May in South Korea and Japan entertaining the US Troops stationed there. An incomparable experience, and we must send HUGE love to all of the US Military and their families for the sacrifices they are making to try and make the world a better place.

Then June came… We got to rock Reggae In The Hills 1st annual show in Angels Camp along with Pato Banton & Yellowman. We released the new Stay Positive mixtape/CD: The Sushi Sampler, featuring brand new tracks, classic tracks, and exclusive tracks from Mystic Roots, The California Kidd, Marko & Top Shelf. All blended and mixed by Ryan I & Triple Crown of Blessed Coast Sound! We passed out 2000 copies at Sierra Nevada World Music Festival. But if you didn’t get a copy, we’re giving it to you to DOWNLOAD FREE right now! CLICK HERE

With July we had Reggae On The River, where we rocked the Cook’s Campground after-party along with Cocoa Tea and Lutan Fiyah. In August we sent cootdog & Marko to North West World Reggae Fest in Oregon to rep the MRB crew alongside Pato Banton & Alcyon Massive.

Which brings us to today… heading to Vegas 🙂 After the Mandalay Bay Beach show this Friday with Ziggy Marley, we turn around and head back to Nor Cal to rock the Dragon Fly Festival in Concow, and then Sunday we cruise to Selma, OR to rock the Rhymin Music Festival with Jah Sun, Abstract Rude and many more.
That’s THREE shows in THREE states in THREE DAYS!
Putting the “LABOR” in Labor Day Weekend. That’s why we named this tour: WORK HARD, PLAY HARDER!
Later this month you can catch us in Sonoma County at the Unity Fest in Guerneville.
Lots of great shows… catch one if you can 🙂

We teased you last newsletter with talk of a new direction for the band…. what does that mean? Well, you remember our guest artist, Marko, who you saw open our shows and rock some songs with us? Well now Marko is the full time DRUMMER! And he still kills the mic from the drum-kit. We also are incorporating a lot more electronic, dance and remix songs in our material. So now, the B in MRB can mean “band” or “beats” Each show you may see a different thing. But just know, you will see Katherine, cootdog, The California Kidd & Marko ripping the mics… sometimes with a full band, and sometimes with a DJ, depending on the show. We’ve had a lot of help from our homies: Rabbit on Bass from The Illies, Korey on Guitar from Top Shelf and Max on Trumpet from Bodhi Rock. Come to a show and experience the new vibes for yourself LIVE.

Special thanks to our sponsors: Singing Bird Family Farm, Got Glass, Calibis Clothing, Got Vape, Free Up Clothing, Ag Mart, Banners & Signs, Legend Screen-printing, ID International, & DOJA Clothing. Without all of you, we wouldn’t have been able to release the Sushi Sampler, play our shows and continue our journey to spread positive music to the people!

We also have something BIG planned for all of our Street teamers in 2012! If you are not already a Street Team member we have included a link so you will not be left out.

Lots of music…
Lots of Love…