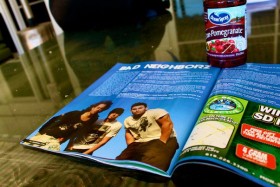 Formed in the fall of 2010, Bad Neighborz, the 3-piece rock/reggae band from Southern California have been brewing a rock/reggae monstrosity with catchy hooks, great melodies, feel good lyrics, topped off with charismatic and stellar stage presence.

In 2012 Bad Neighborz cut back on touring and performing shows for the year spending most of the time recording their new self titled Bad Neighborz full length album at Earth Verb Studios in Cardiff, California. The L.P. “Bad Neighborz” will have between 14-16 tracks which will embody the sound and style of the three piece rock reggae band.

Bad Neighborz was nominated for a 2012 San Diego Music Award and has been featured in over a dozen publications both online and print such as, NugMag.com, SanDiegoReader.com, as well as music play on internet stations SurfRoots.com, Pandora.com and local San Diego radio stations 102.1FM KPRI and FM94.9. Bad Neighborz has also had music featured in local short films, surfing and off-road racing videos. Bad Neighborz music can be purchased at I-Tunes and Amazon.

The three piece is on schedule to release their full length, self titled, debut album & complementing high definition music videos in the spring of 2013. Check out their tour, music, videos, social networks, and